At the beginning of 2021, our partnership with the California Student Aid Commission (CSAC) hit a huge milestone. We completed a total refresh of the entire brand and business systems. With a total of 25 primary and secondary logos meant to encompass the CSAC parent brand and corresponding child logos for each program, outreach, workshop, grant, and scholarship, CSAC was ready to use its refreshed brand systems to tackle a lightning-fast campaign push to increase the number of California students who complete their Free Application for Federal Student Aid (FAFSA) and the California Dream Act Application (CADAA) applications. Working across all Uptown Studios teams, the end result was a campaign that lessened the gap of FAFSA and CADAA non-enrollment by 5% and 10% and connected more students to grant money available to them.

CSAC is a brand with far reach and a long history of serving California’s higher education. However, it is historically confused with FAFSA, a federally run program, and struggles to differentiate itself from it’s over 25 programs and grants. It’s refreshed brand had already begun to help them differentiate but they had yet to set it in motion. The effects of the pandemic and economic downfall of COVID-19 resulted in record-low college enrollment and many students were left under the impression that California could not afford to award grants for trade school, two-year, and four-year education. The Uptown Studios Marketing and Creative Teams joined forces to bring CSAC’s refreshed brand to life while also navigating Facebook’s strict ad policies. The result was a campaign that flourished with little-to-no challenges.

Every great execution starts with an even better plan. After our initial kick-off meeting with the CSAC team, the Uptown Marketing team put their heads together and developed campaign goals, key messaging, and brand personas. Since our relationship with CSAC has grown over nearly two years, we have a very strong understanding of its positioning and audience. This campaign had three high-level, competing goals. This made it challenging to initially separate the needs unique needs of each. However, after a brainstorm and some creative direction we were able to un-stick our planning and clearly identify a plan moving forward. The newly approved campaign goals drove the corresponding creative assets as well as content strategy, allowing us to envision the exact steps needed to bring this campaign to life.

Now that planning was complete and creative assets were outlined and sent for creation, we needed to do more behind-the-scenes work to set up the ads. This started with creating brand personas. Brand personas help us to identify who is being targeted and what messages will appeal to them based on their demographics. After researching FAFSA Volume Reports, labor statistics, maps of college enrollment rates , and social media use trends, we were able to create informed brand personas for each of the four main audiences. From these personas, we determined geographic, interest, and age target as well as what channels to advertise on and how to proportion ad spend. 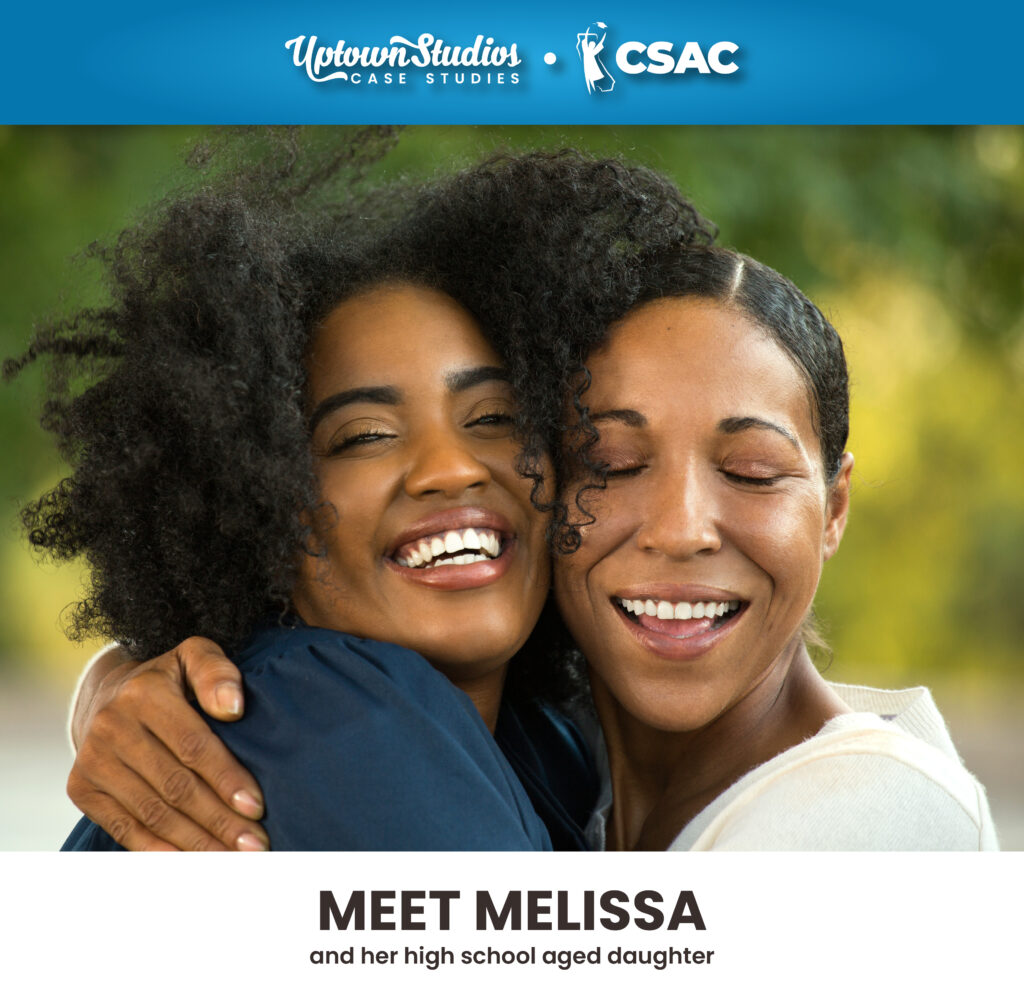 Working with our creative team, our Copywriter developed key messages. Key messages are the essential messages every creative item needs to get across. With key messages developed and approved, our copywriter created ad copy for all social media ads and wrote the script for two animated videos. Ads needed to be created for each distinct audience. This would allow our team to complete thorough message testing and give the design team a lot of room to utilize all of CSAC’s brand colors.

In the end, we created a total of fifteen static image ads and 4 video ads.

How a key message turns into a social media posts

Ads targeted to parents were very different than those targeted to existing college students. By using a pain-point-first approach, ads featured short, Problem-Solution Messaging to drive the target audience to complete the call-to-action. 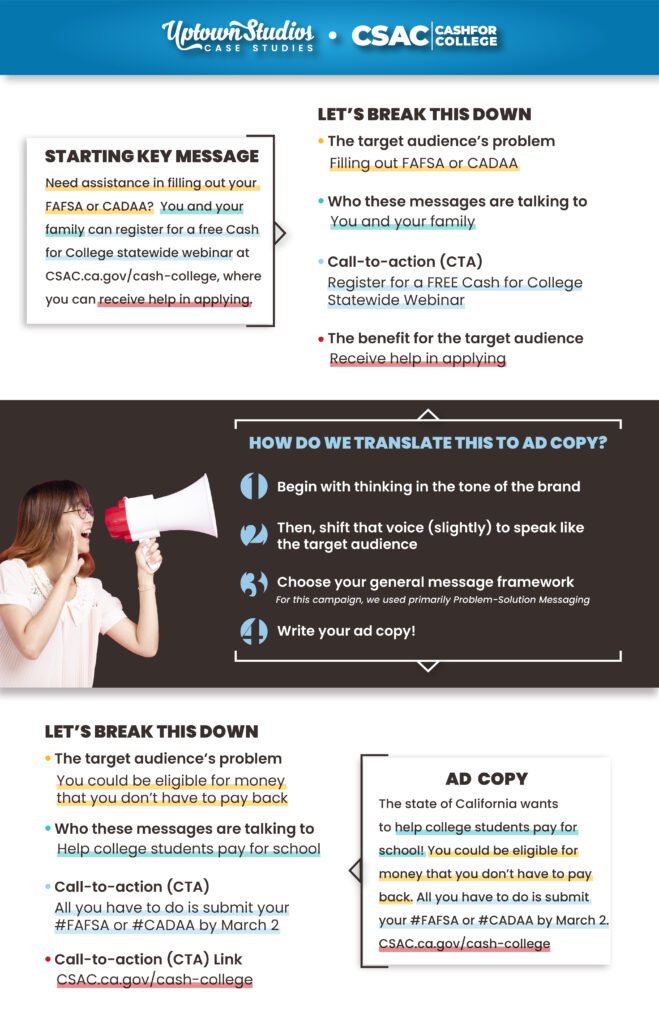 Message Testing While Ads Are Live

To conduct proper message testing, the Marketing Team implemented a time-based approach. The entire campaign duration was one month, so we needed to be smart with our time and budget.

The first week of advertising, all ads were set live without any alterations. This was done to establish baseline data.. At the end of the first week, the Marketing Team reviewed ad data across platforms. Since there was a large amount of initial ads, we had a lot of information to work with. Within the first week, there were already two clear “winning” ads. These ads had the lowest cost-per-conversion by almost $30. There were also a few clear “losers.” The worst performing ad had an incredible high cost-per-conversion in comparison to the “winning” ads. Instead of just running half the ads, all paused ads were instead replaced with one of our winning creatives. 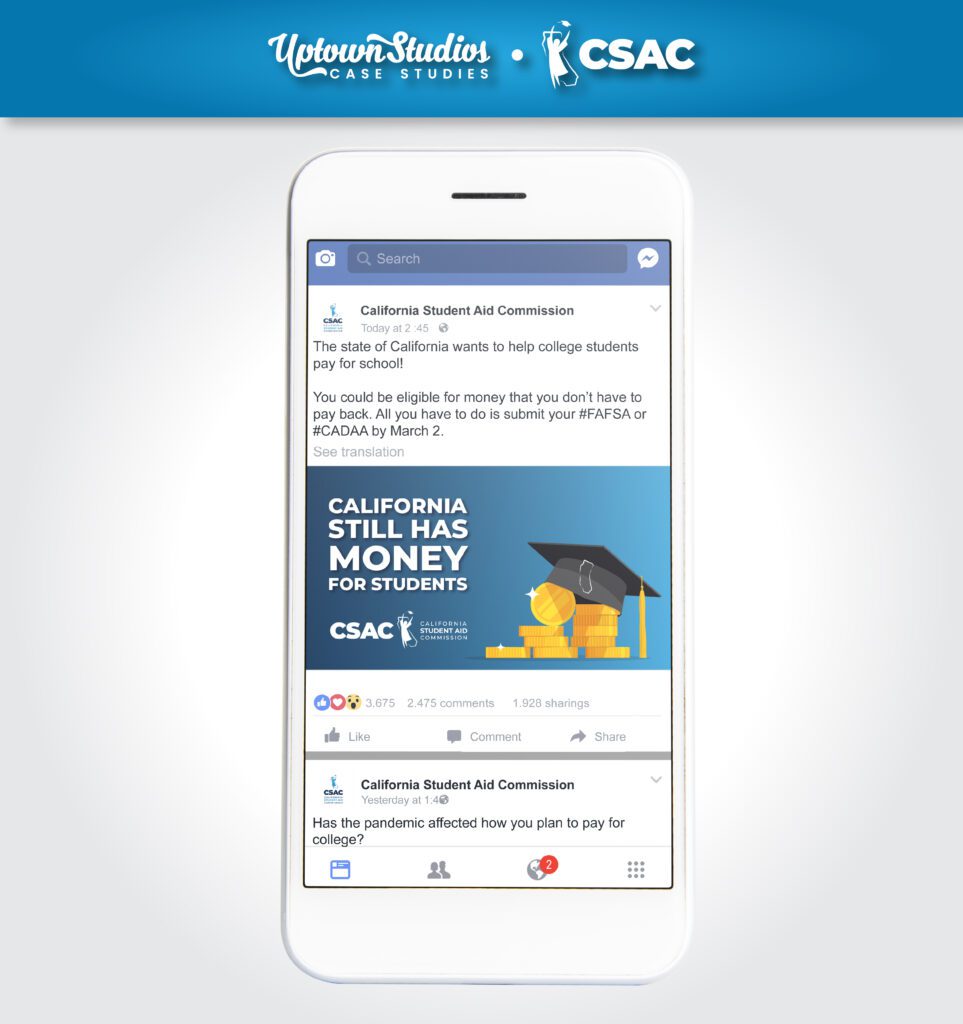 After the second week (halfway through the campaign) we implemented retargeting ads. To create a retargeting audience on Facebook, you need at least one thousand conversions. Our Marketing Team had utilized a high-level conversion strategy so we already built up a total of twenty thousand conversions. This made it easy to create an accurate retargeting audience that resulted in an average click-through rate of above 1%. While 1% might not sound very high, if you know a thing or two about social ads, this is a great metric to land on!

Having spent the first half of this campaign conducting testing, the second half continued using the highest possible performing ads. Minimal tweaks were made to the daily budgets and swapped ads that were trending on the lower side of performance.

At the end of the campaign, ads concluded with the following results:

Examining both ad copy and creative, there were some clear themes that emerged. Looking at the two best performing ads, we can clearly see some similarities! Both ads are predominantly blue and gold in color and they feature large white text with an animated illustration. Interestingly, both of these ads while visually different, featured the same ad copy, “California still has money for students.” 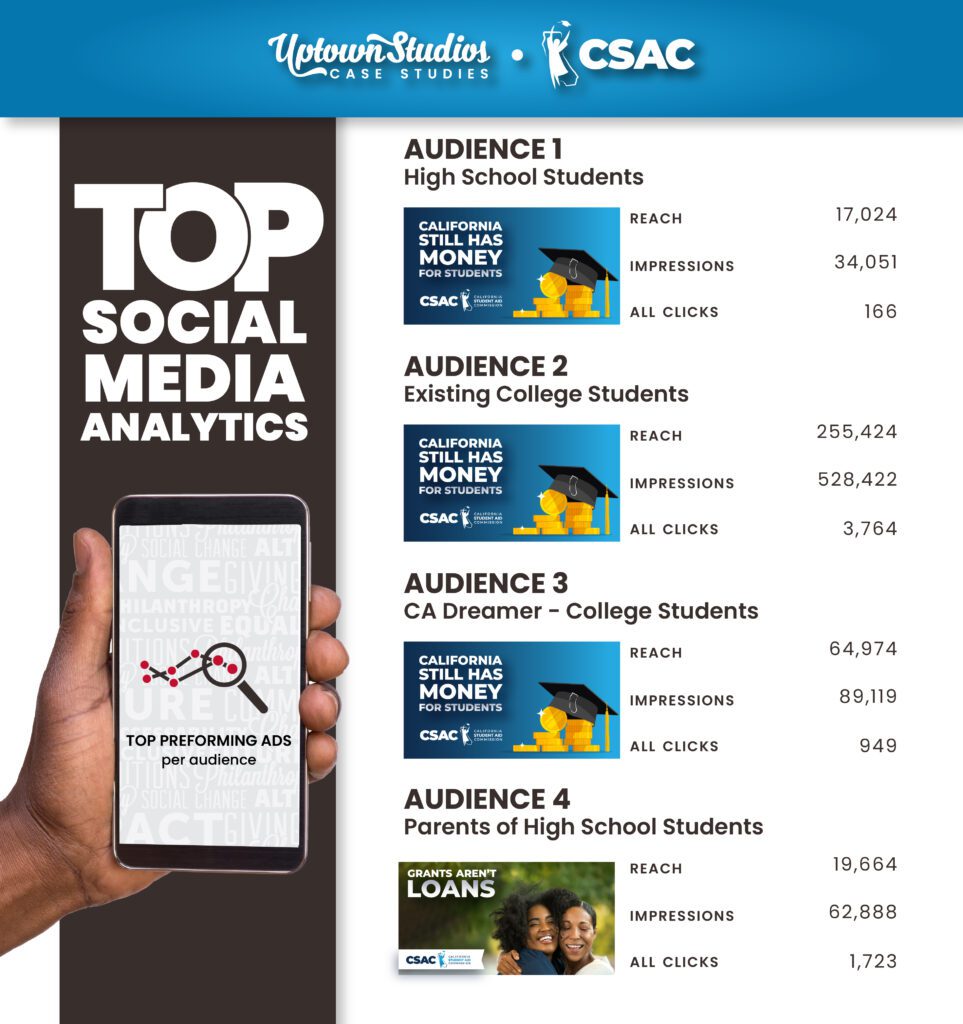 Without a doubt, these ads were incredibly successful! Returning back to our original campaign goals, we lessened the gap of student enrollment for FAFSA and CADAA by 5% and 10%. It was a joy to see the refreshed CSAC brand in action. Referring back to the CSAC brand colors, it’s primary color palette took center stage as the best performing ads and its colors got a little love across the web. Facebook was the best-performing ad channel by far, with Instagram following closely behind. Twitter ads had a low average cost-per-click but did not perform nearly as well when compared to Facebook and Instagram impressions and conversions. Lastly, when looking at the performance of static image ads in comparison to the video, we can see that video had a decent amount of engagements but very few conversions. This leads us to conclude that for this campaign, video works better for engagement but static ads worked better for conversions. 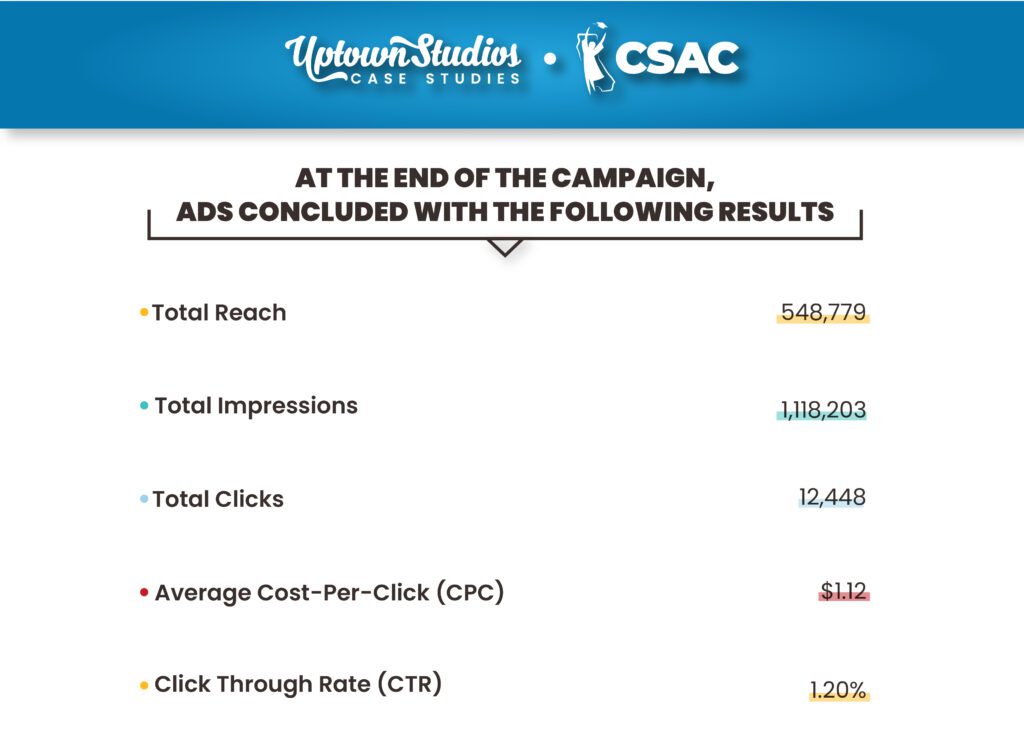 Our team and CSAC were delighted with the results of this lightning fast campaign.