As I sit at my desk I can definitely say I’ve got the post NAB (National Association of Broadcasters) blues. Not because I didn’t enjoy the show, but because I got to see all the things I didn’t know I needed.

Nothing is better than meandering through three football field sized warehouses full of video production equipment that makes you salivate just thinking of the possibilities if you only had a couple million dollars hidden inside your mattress. This year I wasn’t looking for anything in particular and wasn’t expecting many quantum leaps in technology. I just wanted to spend three days just taking it all in and getting my hands on the big boy toys, but as I made my way through endless isles of cameras, drones, gimbles, lighting and grip, I took notice of a few things, which I promptly put on my wish list.

What caught my attention first was the term HDR (High Dynamic Range) being thrown around a lot. Admittedly, I knew what HDR was in the traditional sense in the photography world, but HDR video, I didn’t have a clue. I think I need to read more. Imagine shooting video with a high end camera utilizing all 14 or 15 stops of dynamic range and being able to see them all in the same image.

This gets the image the closest as its ever been to how your eyes actually sees color and contrast. I didn’t think it was possible, but it is. You only need to shoot the video footage properly, run the footage through some proprietary software and view it on an HDR monitor, and the results are stunning. This, of course is a broad brush description of how it’s really done, but you get the picture. It only took a few minutes watching side by side comparisons of SDR (Standard Dynamic Range) footage being played on a SDR monitor and HDR footage on an HDR monitor and I was sold. The great thing is that HDR TV’s are here and becoming more available to the consumer, and HDR content is slowly making its way into the market place and being supported by streaming companies like Netflix. As a video producer/DP for Uptown Studios, I’m excited to start experimenting with the HDR workflow and deliver what I know are the best images to our clients.

Canon’s Cine-Servo Lens
I continued through the fray of vendors trying to scan my badge or get me to sign up for a raffle. Like a lighthouse leading me to my first heartbreak, I came across Canon’s latest servo lens, the Cine-Servo 50mm-1000mm T5.0-8.9. The price tag? Only $70,000. 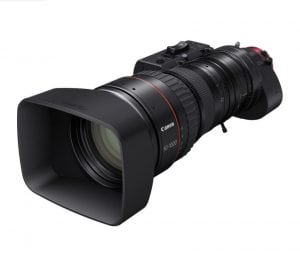 I guess I won’t be getting this anytime soon, but what a lens. It’s slow as molasses, but who cares. That’s the sacrifice you make to have a zoom lens with that much glass in it.

Besides, at a 1000mm your depth of field is crazy shallow and bokah, creamy like butter.
Unfortunately, Canon only had one of them there and it was barricaded under lock and key, like the crown jewels, but I definitely left a few fingers prints on the glass. And a few drool marks.

VR 360 Degree Video
Another craze at NAB this year was VR 360 degree camera rigs and stitching software. I must have seen 15 different companies and 30 different configurations. At Uptown Studios, we are always keeping up with current trends, and 360 video is one that we have had our eyes on for a while. 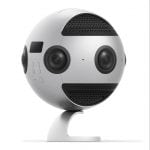 With so many potential uses for our clients, we are experimenting with different cameras and software so we can offer the best and most creative videos.

One more thing I put on my wish list is the Zacuto Gratical HD Micro EVF eyepiece. In my opinion, hands down the best eyepiece out there. I compared it to at least five others at the show and it had the sharpest, most authentic image out there. The best thing is that the eyepiece goes with you forever. Cameras come and go, but a good eyepiece, that’s forever. That’s my opinion on lenses as well. The HD version comes with:

I own a Sony FS7, and if you know anything about the eyepiece on that camera, you know its hard to grab focus and the dang thing falls off your camera with the slightest touch. I’ll be getting the Gratical this year with all the bells and whistles, thus putting an end to all my FS7 eyepiece despair.

All in all, NAB 2017 was a great show. Lots of energy, fun, food to be had by all. I could have spent another day there just playing with Technocranes, cameras, lights, steadicams, and every other piece of video production equipment under the Las Vegas sun, but three days and fifteen miles later, my feet were killing me.

So long, NAB. Until next year.